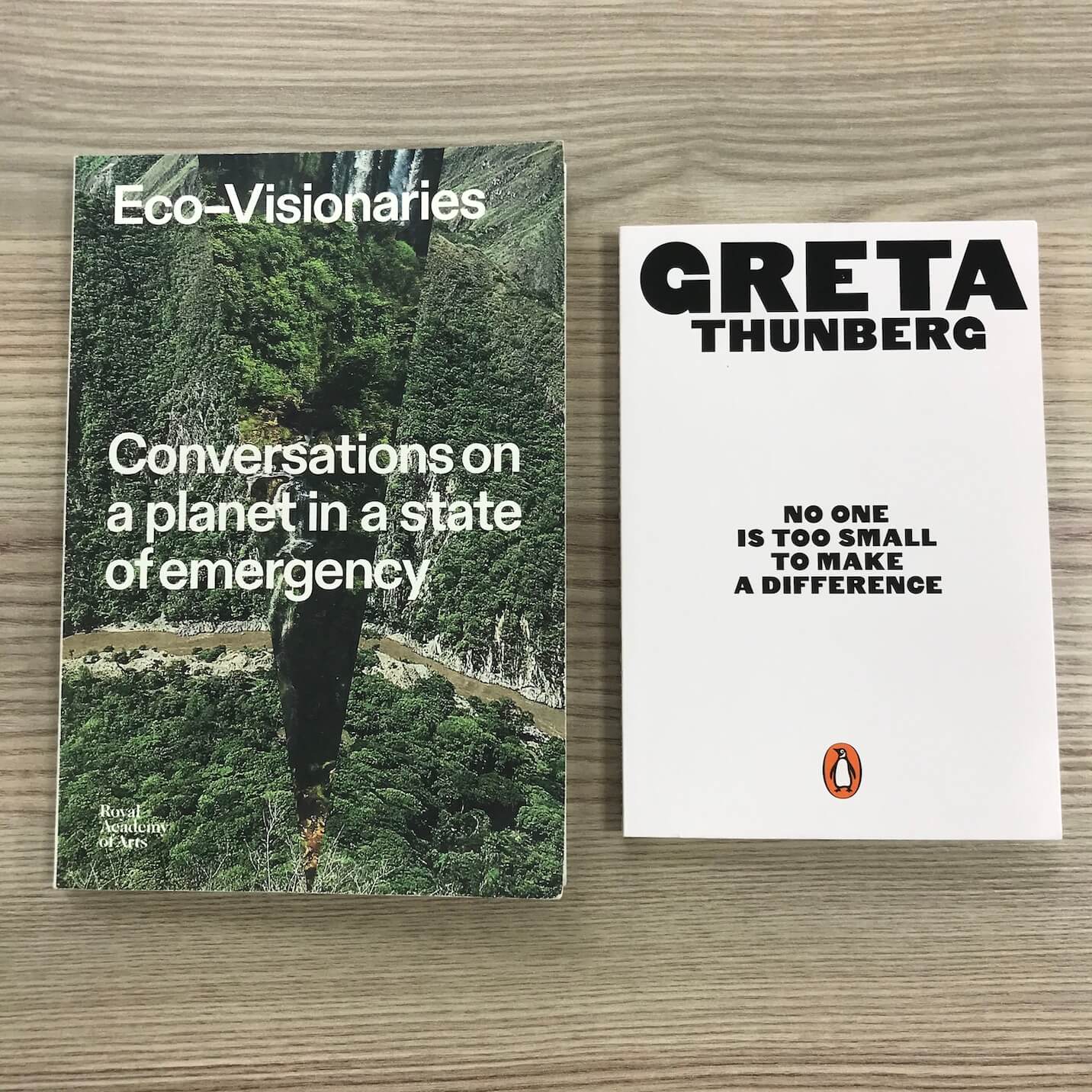 Coverage of the climate emergency and the effect we are having on the planet has become mainstream, stories about everything from climate change to habitat destruction to the wildly differing conversations happening at Davos this week are appearing on our newsfeeds every day. It feels as if I am being continually beaten over the head with a range of depressing numbers:

“We’re already living the data. When you open the newspaper, everything’s shocking and the next day there’s a whole new set of numbers.”
Timothy Morton on ecological thinking p21 of Eco Visionaries

So, it was thought provoking to spend a day in London visiting two exhibitions and reading two new books on the way home. The first exhibition is Disposable? Rubbish and us which is on at the British Museum until the 23rd February 2020. This small but very interesting exhibition points out that “humans have been creating rubbish for as long as we have been making objects” and compares a 3500 yr old Minocean cup made from clay and an Air India waxed paper cup from the early 1990s – both of which were considered disposable by their users and both of which “speak of wealth and power, reflecting the use of valuable resources and labour to make objects that would only be used once”. It is fascinating to realise that the most common finds from archaeological digs are those in the rubbish heaps such as broken pots and animal bones. It is horrifying to consider what future archaeologists may learn from our plastic rubbish.

The exhibition also displays a beautifully woven fishing basket made from the plastic wrapping used for construction materials, which was washed up on the beach of a Pacific Island and made by Guam artist and net-maker Anthony C Guerrero. Although it is a brilliant example of ingenuity, combining the reuse of a modern, waste material with traditional weaving techniques, it raises questions about why the Pacific Ocean is so full of plastic waste in the first place and more importantly how these vast ‘garbage patches’ can ever be cleaned. 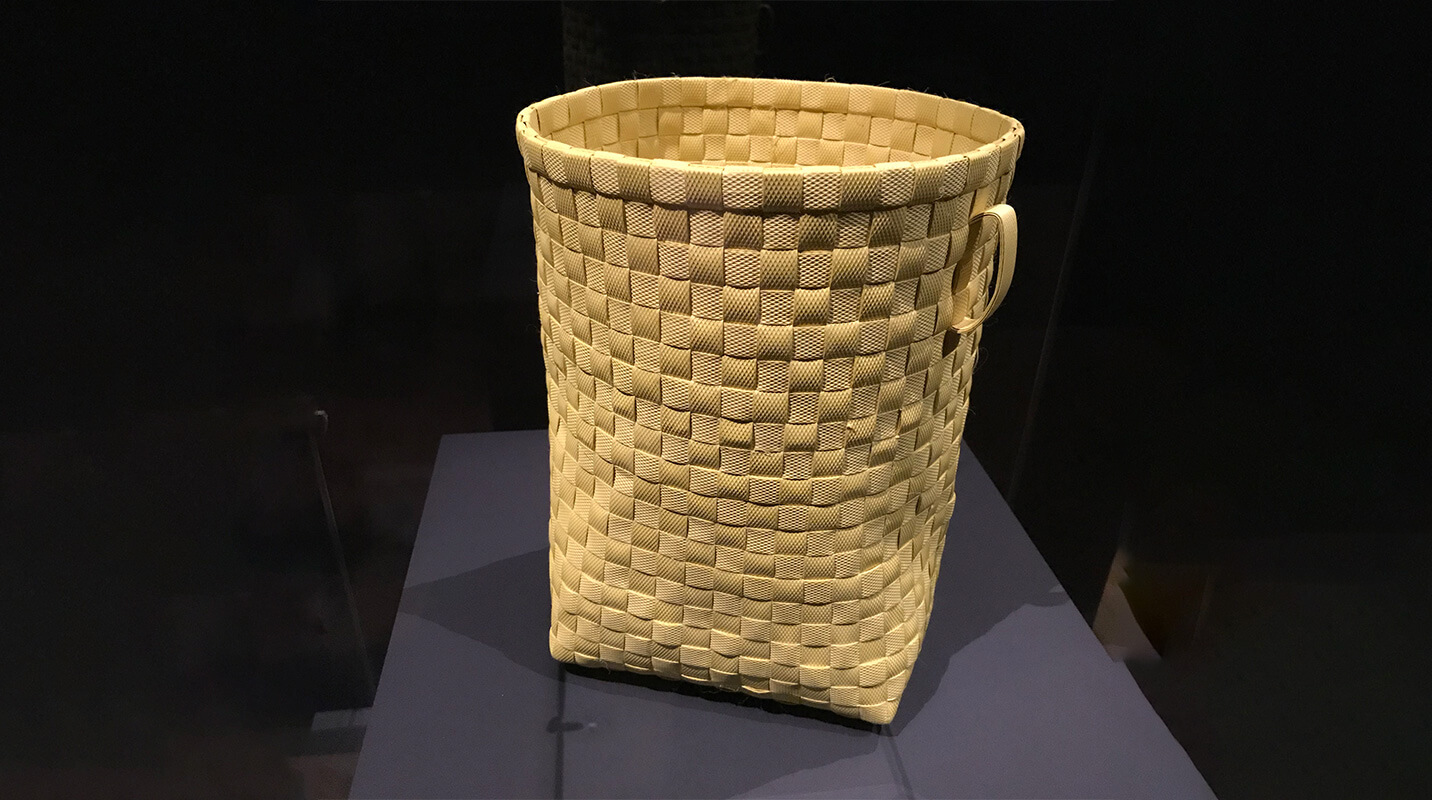 The second exhibition (and first book) is ‘Eco Visionaries Confronting a planet in a state of emergency’ which is at the Royal Academy of Arts until the 23rd February 2020. I’ve been out of the art world for a long time, so the exhibition felt rather disjointed with different viewpoints and media ranging from photographs, to sculpture, to concept models of a new type of architecture, to a prototype of a household sized Biogas Power Plant. Having said that, I found three exhibits particularly thought provoking.

The first is ‘Madrid in the Air: 24 Hours’ by Nerea Calvillo/In the Air, this is a time lapse video of Madrid though a 24 hour cycle which shows the city waking up and falling asleep, but with an intriguing, moving, breathing blanket superimposed over the top. This blanket is a visualisation of air monitoring data and as the blanket rises and falls, as well as increasing and decreasing in opacity, it shows the changing levels of pollutants during the day. It is oddly soothing to watch as the coloured blankets rise and fall but horrifying when you realise that this is the air you are actually breathing.

‘The Substitute’ is a large scale video of large pixelated blocks which transform into a life size, snorting, huffing Northern White Rhinoceros, which stalks around an all-white environment looking rather disgruntled and then suddenly disappears, leaving you looking at a very white, very empty screen. This clearly represents the ongoing extinction of species which is happening at an estimated rate of 200 a day – the last male of this species died in March 2018, so this digital Rhino is a thought experiment, but as the artist Daisy Ginsberg says:

My favourite exhibit is ‘win >< win’ is in a small room where you listen to a voiceover while looking at yourself in a circular mirror, then the mirror changes to a tank of rather beautifully swirling jellyfish, and then the tank changes again – it is a very clever installation piece (I won’t reveal the what happens in case you get to see it for yourself!) The jellyfish turn out to demonstrate the effect we are having on the oceans – as the oxygen levels fall and the temperature rises, jellyfish become one of the few organisms that can thrive in such conditions:

“We are in this crazy, unforeseen and incomprehensible situation where we are competing against jellyfish. And they are winning.”
Rimini Protokoll on survival p29 of Eco Visionaries 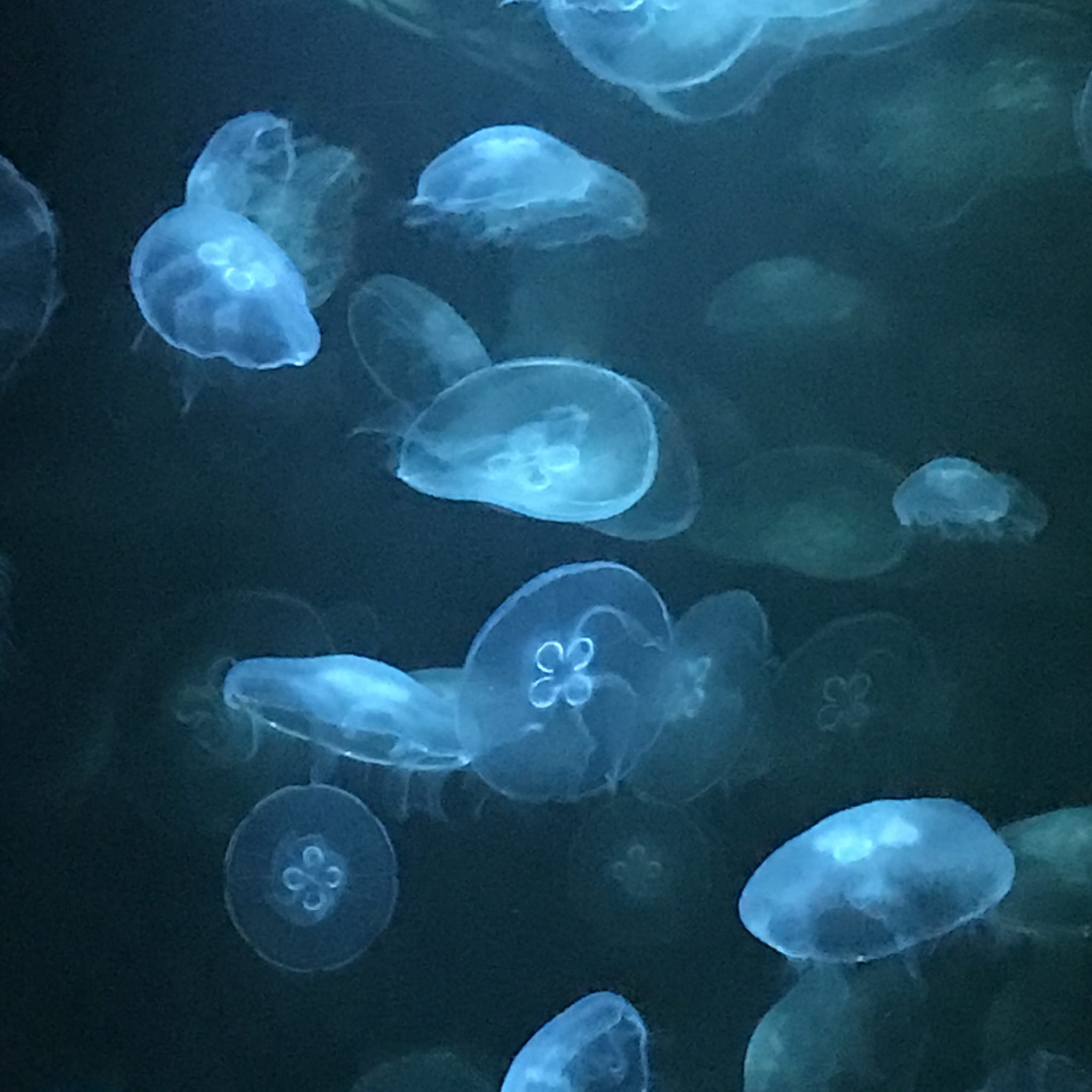 The second book is ‘No One is Too Small to Make a Difference’ which is a collection of speeches by Greta Thunberg who is the internationally recognised climate activist. Her message remains consistent throughout:

“The climate crisis is both the easiest and hardest issue we have ever faced. The easiest because we know what we must do. We must stop the emissions of greenhouse gases. The hardest because our current economics are still totally dependent on burning fossil fuels and thereby destroying ecosystems in order to create everlasting economic growth”

On a personal level, it feels so difficult to make a difference to such an overwhelming problem – it is so easy to slip into apathy and not change in anything in my life but as Jane Goodall says in her essay ‘on reasons for hope’ (Eco Visionaries):

Since starting the Sustainability Series, I’ve had conversations and comments about the changes people have been inspired to make or are already making which brings some hope. Next week I’ll be back with the with ideas and challenges we can take on in the Bathroom – it turned out I needed to do more research on loo roll and water consumption…

Registered in England and Wales as Company Number 10236899.